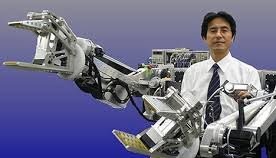 Everybody has heard about Artificial Intelligence, or A.I. However for asset managers I.A., or Intelligence Augmentation, is far more important.

A.I. has long been part of the public consciousness, more due to Sci-Fi than reality. Mechanised intelligent entities appear in fiction starting around the beginning of the 20th century. Generally these machines learn as they go and eventually compete with or supplant the human brain, becoming the base story-line of many a Sci-Fi work.

In 2015 we are still a long long way from that, as you know if you’ve ever tried to use Siri on your iPhone.

Why we humans are the difference between A.I. and I.A.

A.I. is a real red-herring when it comes to business. Certainly within Asset Management there are plenty of algorithms and systems and data flying around, but there is no real A.I.

Instead, pretty much all commercially useful technology in the knowledge industries is better classed as I.A.

That’s because with I.A., human inputs and human skill remain vital. A computer merely augments them, performing calculations and other tasks that the human brain can’t (at least not in a reasonable amount of time). The I.A. computer amplifies our human skill.

I.A. doesn’t replace the human, we still require a skilled person, but it makes an extra contribution to the human’s decision making. I.A. helps people get the most of their own skills, using their own accumulated knowledge, experience, learning and intuition.

Look again at the picture above: the guy with the robot arms is augmenting his capabilities in executing a physical task. He is still directing that task, and neither he nor the machine can do it alone: this is the physical analogy to the I.A. computer helping a Fund Manager in his/her decision making, such as when creating a portfolio of assets for their investors.

There’s really nothing new about I.A.

I.A. isn’t a new concept. It’s pretty much been the foundation of business innovation since the industrial revolution.

Take a process => Isolate the true human skills => Augment the ability to produce through technology.

In businesses that don’t require vast amounts of brain power – the industrial revolution started by automating aspects of textile manufacturing – human skills can be mostly replaced, or more accurately re-directed.

But in the knowledge industries – and Asset Management is the purest commercial application of knowledge for profit – human skills are an integral part of the production process. They can’t be replaced. But they can be augmented.

And the way to do this is to design the (decision-making) process so that you benefit most from what humans are good at, and you automate most where they fall short and where computers can help.

I.A. is a major differentiator in A.M.

This may seem obvious, but historically the Asset Management industry has been slow to adopt I.A.

As I’ve explained previously in this blog, in A.M. innovation can be tough and personalities still drive decision making.

But there are very real advantages for asset managers willing to invest in I.A.

In fact, I observe a definite correlation between I.A. awareness and A.M. success:   one difference between those large AM businesses that have succeeded and those that remain small is that the larger businesses are open to I.A. They have used I.A. to augment the skill sets of their staff. That is one of the reasons that they perform better, and grow faster.

So what role does I.A. play in your business?